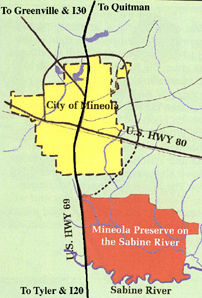 The windmill was purchased with funds provided with a grant from our local utility company; SWEPCO/AEP. A windmill collector/restorer, Mr. Tim Boyd, near Tyler, had several windmills, parts, etc. and gave the city an opportunity to purchase the windmill at a very competitive price. The Public Works Dept hauled the windmill in pieces to the preserve. The crew built a lift with a pulley, waited for a calm (windless) day, assembled, and tilted the windmill into place.

While loading the windmill at Mr. Boyd’s place, he said that he had a totem pole that he would donate to the preserve. The totem pole was made by “Chainsaw Willie” who routinely carves items at Canton Trades Day. The Boy Scouts honor camping organization, the Order of the Arrow (OA), was contacted to see whether they would restore the totem pole. There was some fading paint indicating colors. The OA did a terrific job at restoration. The city public works mounted the totem pole in time for the Boy Scouts 2012 District Camporee.